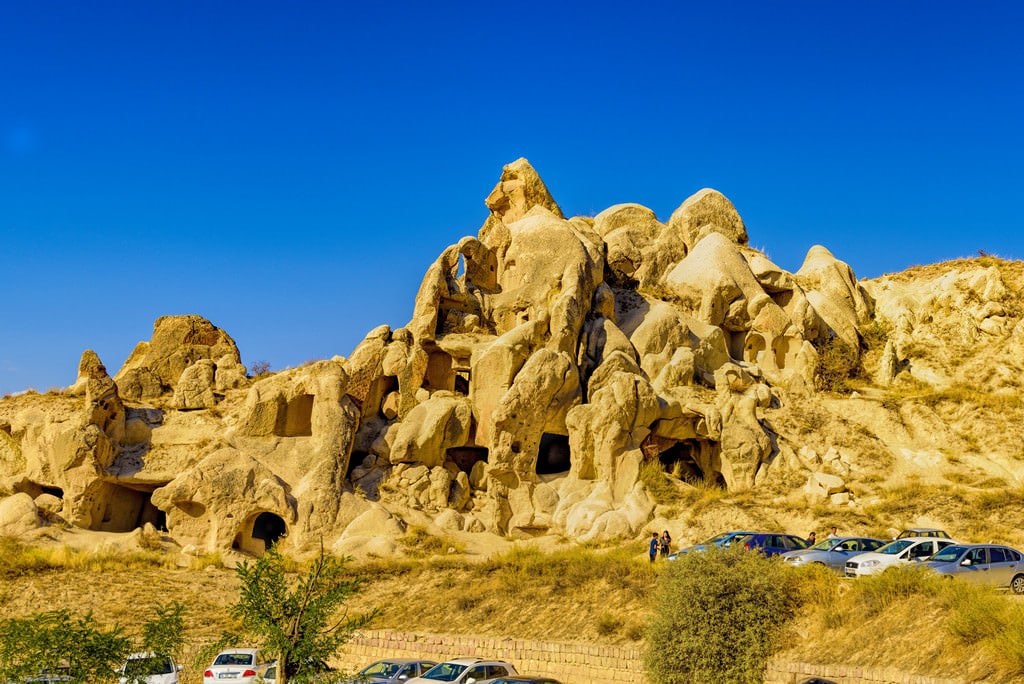 In 1976, the volcanic plains in Cappadocia in Central Turkey received the distinction of being declared a UNESCO World heritage site for its truly unique landscape. Full of small hillocks, slender columns and hidden entrances to vast underground caverns, it is more like some imagined fairyland, peopled by legendary creatures such as Tolkien’s Hobbits or Trolls out of Scandinavian folklore! 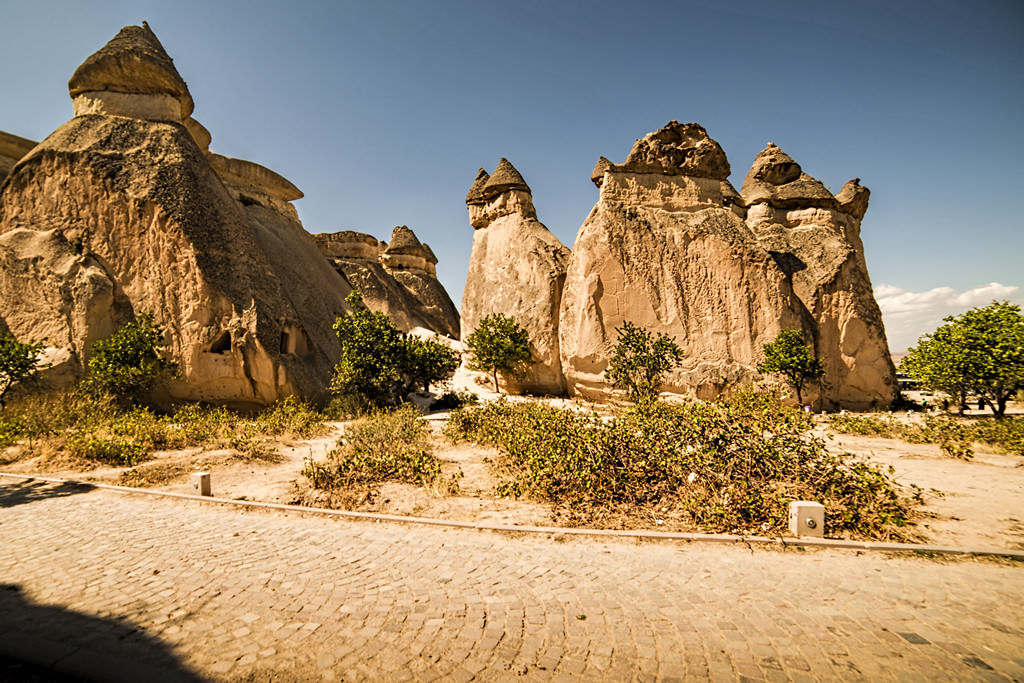 Most surprising of all is that the architects of this marvel of strange and stark beauty are three volcanoes surrounding the plains that died about 2 million years ago! Of course, erosion due to wind, rain and streams of water running down the sides of the dead volcanoes did the actual sculpting over thousands of years until an alien landscape emerged for modern men to marvel at.

During their active lives, these three volcanoes, deposited about 100 to 150 feet of soft volcanic layers called “Tuff”. Erosion formed clusters of hillocks called “Hoodoos” and slender columns with a capping stone that the French called “Fairy Chimneys”. Most surprising of all is that while Hobbits and Trolls are imagined, real people inhabited some of the Hoodoos and the underground cities!

Those of us familiar with JRR Tolkien’s mythical dwarfs know that Hobbits are short, retiring creatures capable of heroic feats of courage, if required. They live in cave houses in the fictional Middle Earth.

We do not know just when Cappadocians began to live inside Hoodoos. The Hittites who first populated Cappadocia lived between 1800 and 1200 BC. It is entirely possible that some Hoodoos were converted to dwellings some 1500 years before Christ. Amazingly, a few Hoodoos are inhabited even to this day! 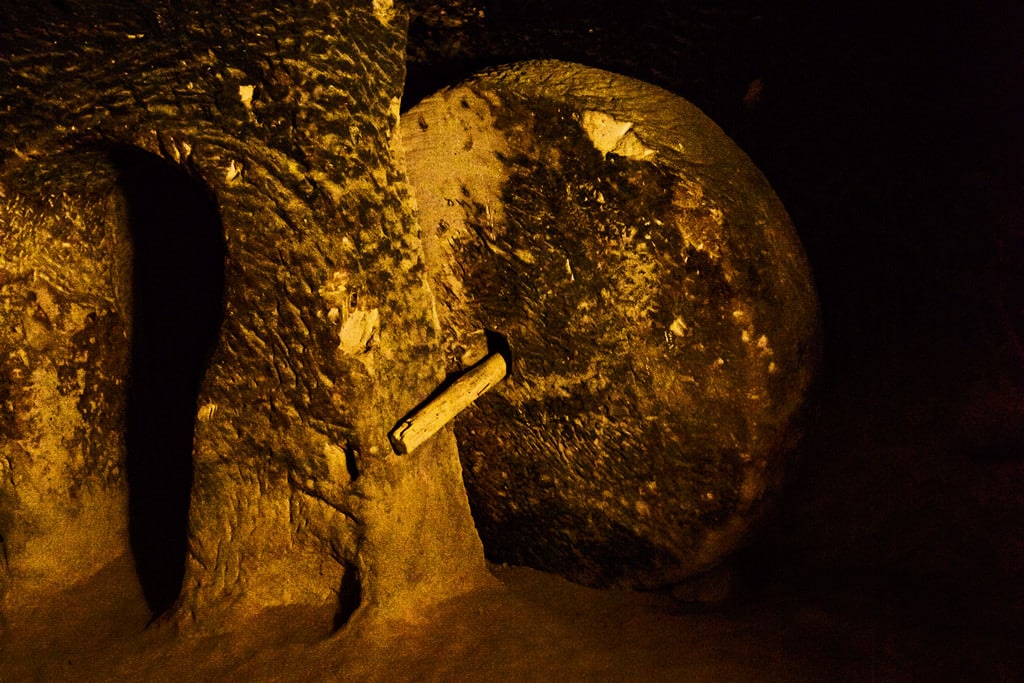 Entire colonies grew up in a cluster of Hoodoos, with connecting streets and passages. Many caves already naturally formed, were extended. Sometimes several levels were connected together by internal passages. Cave openings had doors or windows built into them to protect the inhabitants from the inclement weather outside.

Only very few Hoodoos are inhabited today. Due to risk of cave-ins, construction of new dwellings in Hoodoos is no longer permitted and those that still live there are being encouraged to move out to normal buildings. However the ones still in use as private residences draw tourists like a magnet.

Replacing the private Hoodoos are some cave hotels converted from the larger ones. The interiors are split in several levels and the walls are often actual cave walls. Fitted with all modern amenities, these cave hotels are preferred over conventional ones by many tourists.

In Scandinavian mythology, trolls may be either dwarfs or giants. The common factor, however is that they all hate humans! In Tolkien’s Ring trilogy, trolls make formidable opponents and men generally fear them. However, instead of frightening others, some Cappadocian “trolls” were forced to live underground out of sight for fear of repeated invasion by hostiles!

The fact that the Tuff layers are easy to dig down into may have led to the practice of digging concealed underground caverns by early Greek Cappadocians who had converted to Christianity in the 4th Century. They were seeking refuge from invading forces of the still Pagan Greeks and Romans who overran parts of Turkey. Even after the Eastern Roman Empire was established in Turkey under Emperor Justinian, the travails of the Christian Cappadocians did not end! They continued to be hunted by the Moslem Seljuk and Ottoman Turks who came to rule Turkey after the fall of the Christian Byzantines. Finally, the Mongol Timur’s forces attacked them as they came to fight the Ottomans! So they were forced to continue living underground like frightened Trolls, hiding out of sight!

Derinkuyu could be closed from the inside with large circular stone doors. Each floor could be closed off separately. The city had all the usual amenities, such as wine and oil presses, stables, cellars, storage rooms, refectories, and chapels. Between the third and fourth levels is a vertical staircase. This passageway leads to a cruciform church on the lowest (fifth) level. The large 180 foot ventilation shaft appears to have been used as a well. The shaft also provided water to both the villagers above and, if the outside world was not accessible, to those in hiding inside. 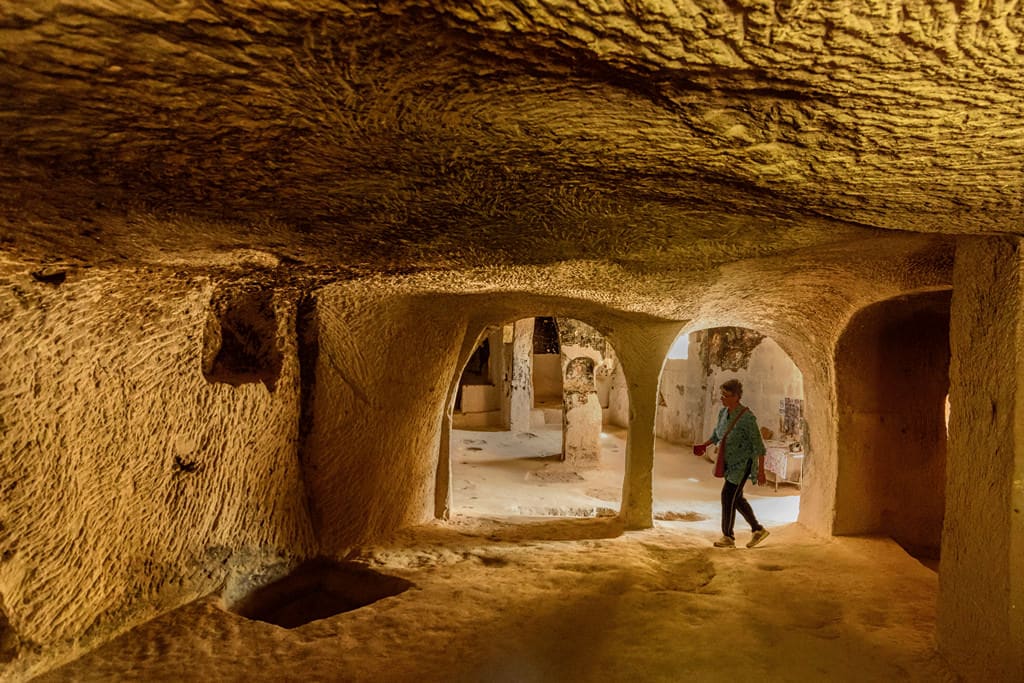 The city at Derinkuyu grew to its full size during the Arab–Byzantine wars (780-1180) when large Christian population had to hide from invading Moslem forces. In this period the city was expanded and a network of tunnels was dug to connect it to other underground settlements nearby.

In 1923, there was a population exchange between Turkey and Greece. The Greek Christians were sent over to Greece while Greek Muslims were accepted in Muslim Turkey where there was no need for them to live underground. So, the underground cities were abandoned.

Derinkuyu and similar other abandoned cities were opened to the public in 1969 and remain a very big draw for tourists to this day.

Sadly, although no fairies or Trolls ever lived in Cappadocia, the stories of real people who did live there, their feats of engineering, the landscape around them and their very chequered history is no less fascinating than all the fairytales you can imagine about mythical Hobbits or Norwegian Trolls!

By Jayant Neogy – I am a student of travel photography, still searching for the perfect shot of the perfect scene!. Soldiering on with my trusty D800

Montgolfier in Cappadocia by Jayant Neogy