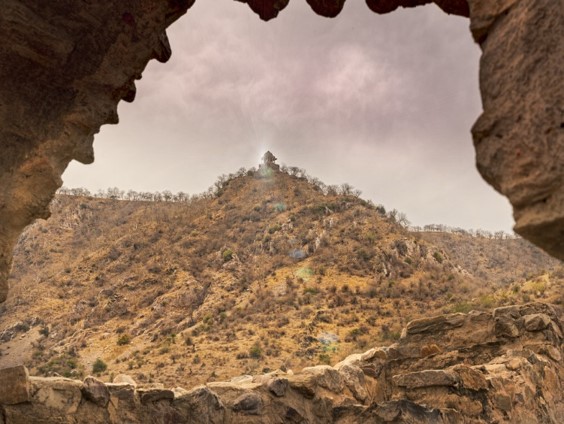 Think of the state of Rajasthan in India and your mind is filled with images of sand dunes, huge deserts, and occasional water bodies. Above all, you will think of massive forts and palaces of kings who were once rich as Croesus! But a tale of love, revenge and witchcraft in a demolished city in a deserted corner of Rajasthan, is probably the last thing that will come to your mind. 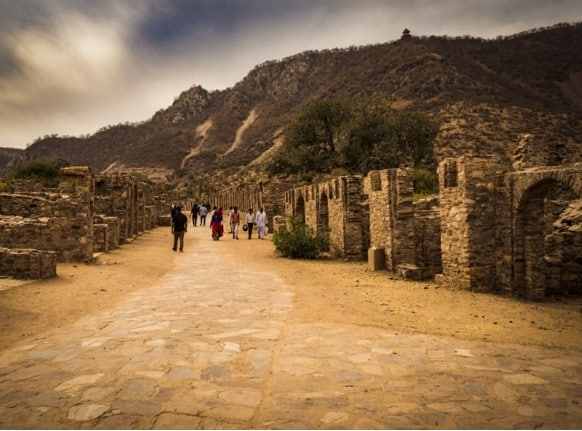 Strangely enough, off the beaten track, just 220 miles from the country’s capital New Delhi, there is just such an abandoned town, a destroyed palace, and a haunted fort! The story surrounding this erstwhile prosperous town of Bhangarh, now empty, sounds like an opium-induced dream! Before we plunge into this tale of the supernatural, let us examine the facts surrounding this eerie city and the legends of its destruction.

History tells us that King Bhagwan Das built this town in 1573 for his younger son Madho Singh, who named the city after his illustrious grandfather Man Singh, the famous general of Emperor Akbar. Man Singh was also known as Bhan Singh in these parts, and that is how Bhangarh got its name. The Man Singh connection got the city the backing of the all-powerful Mughals, and the city flourished. As the Mughal Empire weakened, however, Bhangarh no longer had a powerful protector.  So, in 1720 Jai Singh II of Jaipur attacked and took over Bhangarh. The population of Bhangarh started to diminish. After that, the great famine of 1783, which occurred in 1840 according to the local calendar, finished the remaining population. It was one of the worst famines in India, infamously known as the Chalisa or Forties. It is also said that the physical destruction of the town and fort was the result of a battle with a neighboring kingdom of Ajabgarh. Both city-states were destroyed. While Ajabgarh was rebuilt and repopulated, Bhangarh lies abandoned even to this day.

History does not explain why the entire town of Bhangarh has homes and shops with collapsed roofs, why the palace and the fort has so many damaged floors, why no one dares to linger in the area after dark and why the staid and down to earth Archaeological Society of India thought it fit to install a prominent notice forbidding access to the site after sunset and before sunrise! So we leave behind recorded history and turn to the supernatural for an explanation. 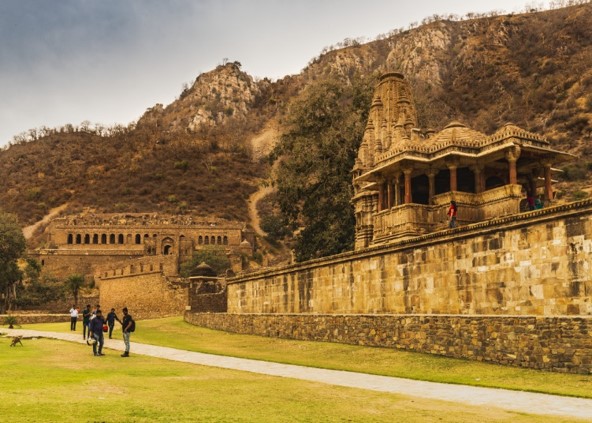 None of these stories are documented or supported by rationality or logic. But they do make absorbing tales, handed down for over two centuries from father to son by word of mouth. These tales are woven into the fabric of the legend of Bhangarh, and the locals will recount them with great gusto to any visitor who will stop to listen and then teller and visitor alike will hasten out of the area before sundown!

The Curse of the Holy Man

Once upon a time, goes the first tale, a holy man named Balu Nath lived alone in the hills above, even before the fort existed. Before king Bhagwan Das built the fort, he sought blessings of the holy man. Balu Nath agreed on the condition that the height of the palace will not be built so high as to overshadow Balu Nath’s dwelling or his place of worship. Otherwise, warned Balu Nath ominously, the whole town will perish!

Years passed, and the city prospered. Slowly over time, Balu Nath’s warning was forgotten, and one of the later kings added three more floors to the fort. The proud move proved fatal! The palace’s shadow now fell across Balu Nath’s dwellings! The curse of the holy man doomed the city. Roofs collapsed, walls and balconies crumbled, and people fled overnight leaving a ghost town behind! This story is suitable for grownups and children alike. While there is the curse to ponder upon, there is also a moral, “pride comes before a fall!”

The Princess and the Black Magician

After the children go to bed, a more interesting story begins to do the rounds. This is the story of the lovely princess Ratnavati, a girl of great beauty. Her fame spread to neighboring kingdoms, and when she turned eighteen, rich and titled suitors lined up for her hand in marriage. Amongst these nobles and princes, there was also a sorcerer named Singhia, adept in black magic. The “Tantric” as such sorcerers are called in India, knew well that he stood no chance of winning the princess by fair means. So he decided to use black magic, an irresistible attraction potion that lay encased in a bottle of perfume.  All Singhia had to do was to somehow pour the perfume on the princess!

One day, when the maid of Ratnavati was buying perfume in the market, Singhia saw her. It was a simple matter for him to bewitch the servant and persuade her to carry back his magic potion. Fortunately, Ratnavati herself was following the maid and had seen the spell being cast, and the perfume changes hands.

The princess immediately snatched the bottle from the maid’s hand and threw it on a large rock by the wayside. The spell worked, but unexpectedly! Enchanted by the potion, the rock itself flew off the road and fell on Singhia, who was crushed fatally!

Before dying, Singhia cursed the city of Bhangarh. The curse killed princess Ratnavati during a battle that followed between Ajabgarh and Bhangarh. The roofs of the houses in the city and in the fort fell in, and the people fled overnight. Over time, while Ajabgarh was rebuilt and repopulated, but to this day, Bhangarh remains in ruins, forlorn and uninhabited; reputed to be one of the most haunted places in India! 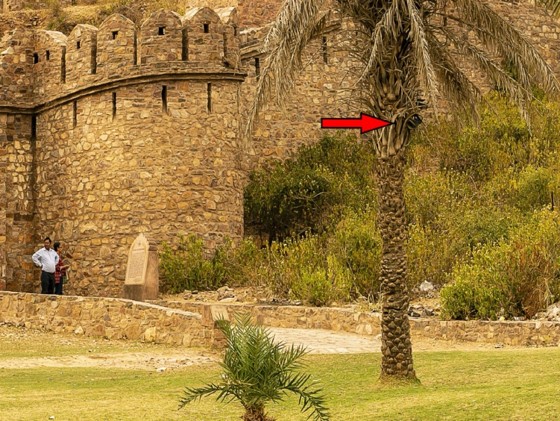 A couple of intrepid news channels in India deputed ghost hunters armed with motion sensors, infrared cameras, and sound recorders to get definitive proof. But the results remain ambiguous. The villagers around the place, however, refuse entirely to have anything to do with the place between dusk and dawn. They are convinced of a malevolent presence in the fort after dark, and they need no proof to stay away.

Sadly, during our trip to Bhangarh, we saw no ghosties or ghoulies or other things that go bump in the night. We did shoot several pictures of the fort. In one of the shots, however, after enlargement, high up the palm tree, we saw a couple of slippers. Was this a just a prank, or was there an invisible body perched on the tree with only the slippers showing? Well, you be the judge!

I am a student of travel photography, still searching for the perfect shot of the perfect scene!. Soldiering on with my trusty D800.

Malacca – The Cradle of Malaysia