Why visit only two mosques when Istanbul is home to over 3500? Well, it is unlikely that on a tourist's schedule you will get to visit all of them! So why not choose two that are the most spectacular and famous? Make your way to the Sultan Ahmed square in the old part of Istanbul. You will be bewitched by two of the most outstanding mosques, the Hagia Sophia and the Sultan Ahmed Mosque or the Blue Mosque. Conveniently, they face each other, easy walking distance apart. The Hagia Sophia has been around for 1600 years and is steeped in history while the Blue Mosque was built to confront and surpass the older one and was built some 1200 years later.

The Sultan Ahmed square is packed with locals, tourists, and street vendors. There is a beautiful garden with fountains, a tram service by the side of the square and seats for visitors. Look ahead across the gardens and see the ancient grandeur of the magnificent Hagia Sofia; turn around and be greeted by the imposing minarets and domes of the exquisite Blue Mosque. Under a deep blue sky, surrounded by children running in the grass, dogs sleepily resting in the shade of palm trees and happy picnicking families, this place is probably the grandest visual treat for a tourist to Istanbul.

Although very close to each other, the two mosques are entirely different in history and style. The Hagia Sophia traces its origin back to the Byzantine period when it was built as a church over the ruins of Roman temples. In its lifetime, it has been burnt down and rebuilt at least thrice, converted to a mosque and then into a museum and has a unique architectural style unmatched anywhere else in the world. The Sultan Ahmed mosque, on the other hand, is an example of pure Ottoman architecture and was never anything else than a mosque built to dominate and intimidate, but lacking the grace and artistry of the Hagia Sophia.

Roughly 1600 years ago, the Eastern Roman Emperor Theodosius I decreed that Christianity shall be the sole official religion of his empire. In 380 AD, in his capital Byzantium, he built a wooden church on the ruins of pagan Roman temples. Sadly, the church was burned down twice, but each time it rose like a Phoenix from its ashes, rebuilt by the ruling emperor.

The burning stopped only after the wooden church was replaced by a cathedral of stone by the Emperor Theodosius II. However, what fire could no longer do, was accomplished by mob fury. After its destruction in a riot in 532 AD, the Emperor Justinian built a very remarkable church in his renamed capital Constantinople, in 537AD. This church the Hagia Sophia endures even today as a world heritage site. 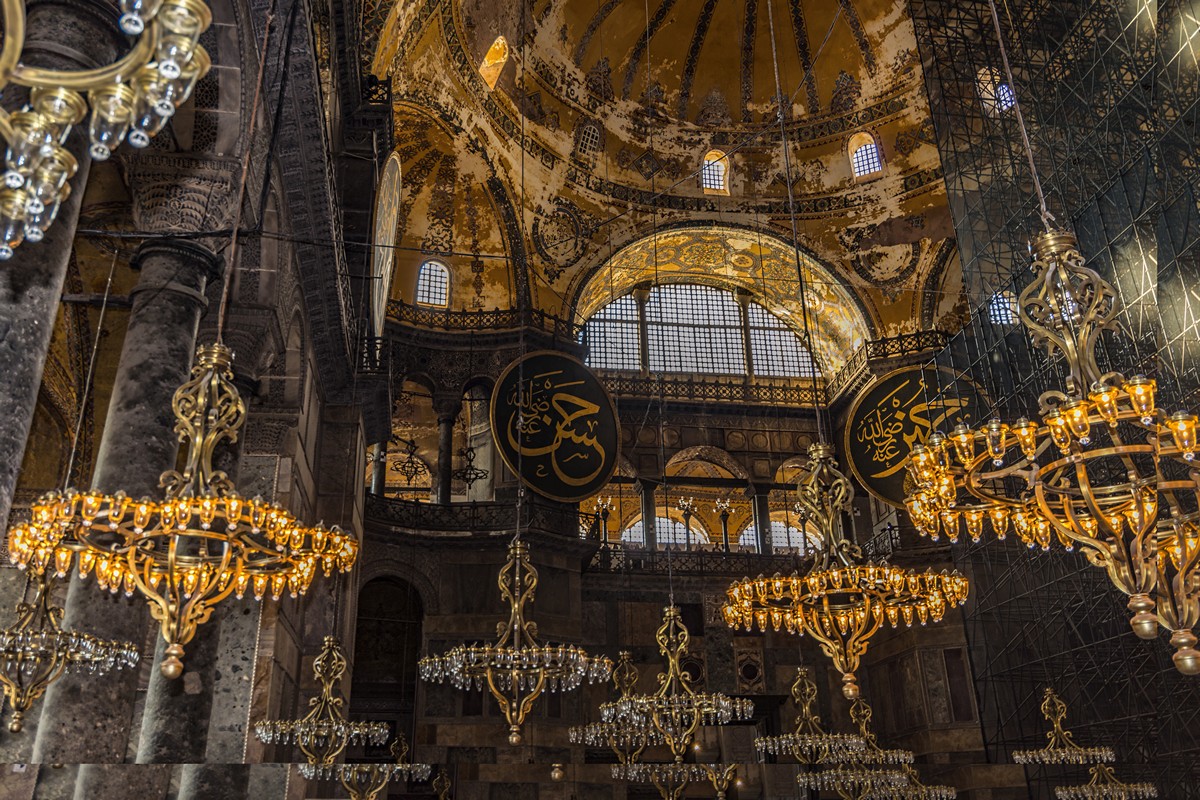 Justinian employed a famous mathematician and a professor of mechanics to design and built the church. No expenses were spared, and Justinian himself oversaw the work. On its completion, the Emperor exclaimed “Glory to God who has deemed me worthy of accomplishing such a work! O Solomon! I have vanquished thee’’. Justinian was referring to the great height and unique design of the massive dome and comparing his church to the great temple of King Solomon.

When Constantinople fell to the Ottoman Sultan Mehmed II in 1453, the city was renamed Istanbul, and the Hagia Sophia became a mosque.

Fortunately, the conversion resulted in minimal damage and defacement to the Christian symbols of Hagia Sophia, although they were not periodically restored over the years. However, acknowledging the unique architecture of the church, the Ottomans added many symbols of Islam inside the building without uprooting all signs of Christianity as was the prevailing custom. Recognizing the structure's importance and its venerable age, the Ottoman architects supported the building outside with massive buttresses.

The exterior is aesthetically pleasing and imposing at the same time. The interior shows you its majestic dome's unique style, in which a huge circular dome appears to float on a square foundation. Designated as a public museum by Kemal Ataturk in the early 20th century, the structure fully deserves its World Heritage tag. 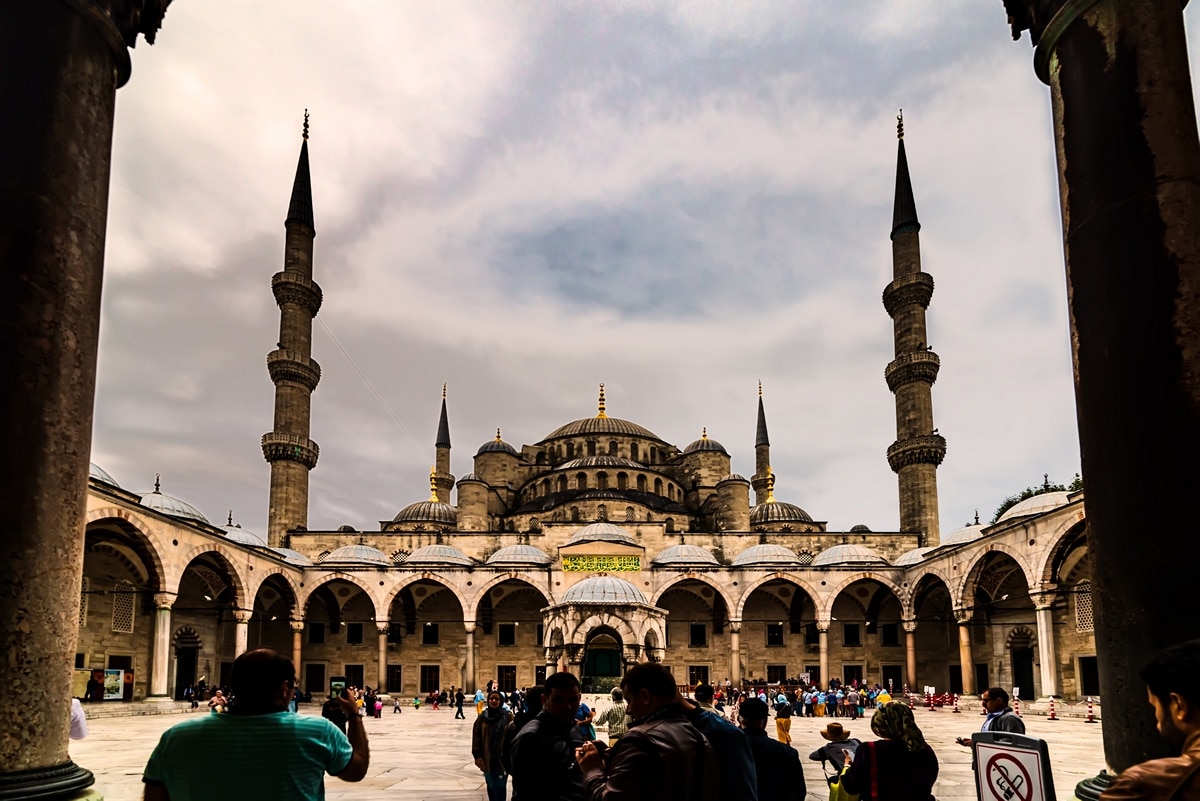 The Sultan Ahmed Mosque was built solely as a mosque. It is massive and dominating, but it lacks the aesthetic grace of the Hagia Sophia.

Early in his reign, Sultan Ahmed I realized that he had little chance of making it to the Ottoman hall of fame due to his poor success in war, the chosen route to riches and glory amongst the Ottoman sultans. So, at the tender age of 17, in the year 1607, he decided to praise the Almighty and be remembered for the magnificence of the mosque he would build to surpass even the Hagia Sophia.

He chose a location facing the Hagia Sophia across the Sultan Ahmed square, next to the Hippodrome, on the spot where the Great Palace of the Byzantine emperors had stood, and used their existing foundations and vaults. Sadly, the Sultan lacked the funds that other sultans could amass as war booty. So he could not entirely create what he had hoped for. Yet, the mosque is a unique blend of Islamic and Byzantine architecture and the interior is decorated with 20,000 blue tiles bearing a lotus motif. These tiles give the mosque a grand interior and are the origin of the mosque's alternative name, the Blue Mosque.

However, Istanbul's last imperial mosque has a cluttered interior with four pillars supporting its dome thus failing to create the illusion of the main dome of the Hagia Sophia that appears to float! To compensate, the mosque was provided with six minarets against the 4 of the Hagia Sophia. Unfortunately, this act led to more trouble for the sultan since only the Prophet Mohamed's tomb had 6, and it was sacrilege for any other mosque to have as many. The sultan had to appease the keepers of the faith by paying the cost for a seventh minaret for the mosque at Mecca!

Whether the Blue Mosque fulfilled Sultan Ahmed's desire to go down in history is debatable because the title of the greatest Ottoman sultan undoubtedly goes to Suleiman the Magnificent the 10th sultan who ruled between 1522 and 1566 when the Ottoman Empire was at its peak. Suleiman built the Sulemanaya Mosque also in Istanbul.

Regardless of the reason for the construction of the Blue Mosque, the world has to agree that the two great monuments facing across the Sultan Ahmed square give Istanbul a vista that has perhaps no equal anywhere else in the world.

You could persist with more mosques of course, but you may prefer to visit the richness of the other monuments of Istanbul such as the Topkapi Palace and the Dolmabache palace, or tired of being on your feet, take a cruise down the Bosporus. But that is another tale for another time!

I am a student of travel photography, still searching for the perfect shot of the perfect scene!. Soldiering on with my trusty D800.

Photographing The Beginnings of the 2020 Election