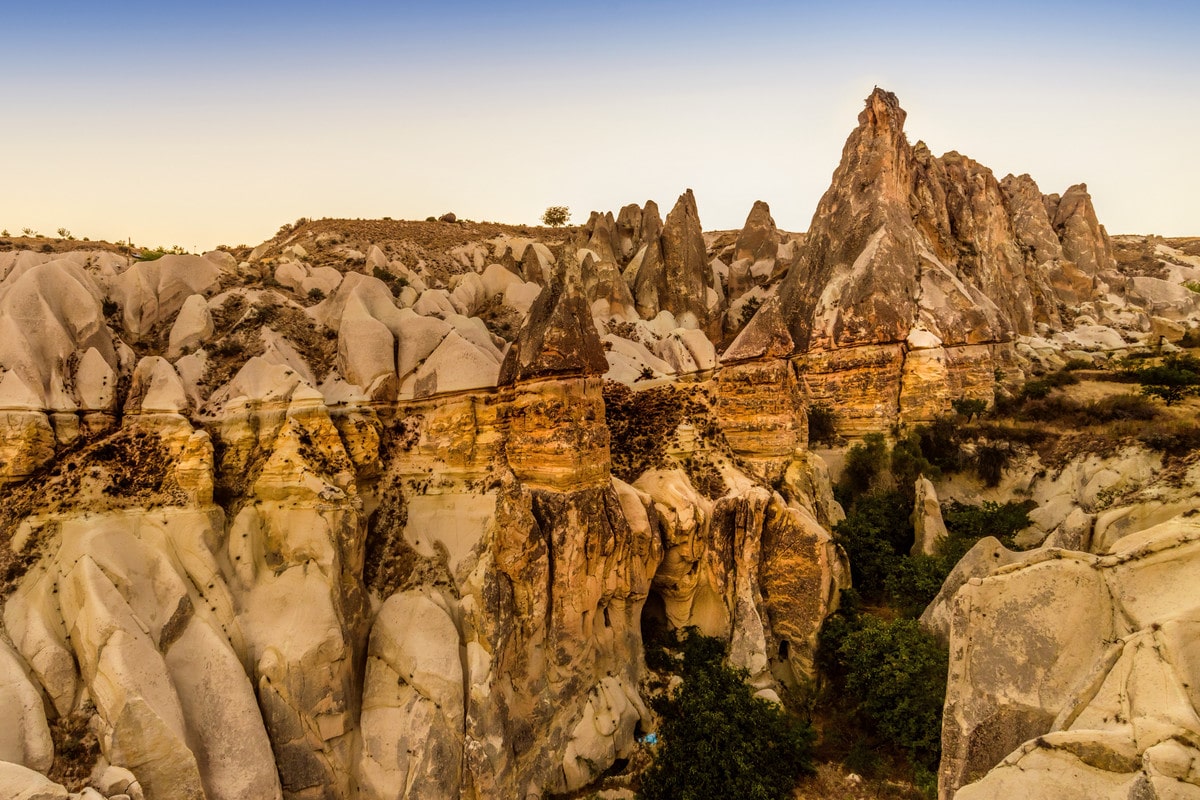 Had the Montgolfier brothers lived longer by some two hundred years, they would have seen the new Avatar of their invention, the hot air balloon. Perhaps, they might not have recognized the transformation that their invention had gone through. Till early 1900’s, balloons remained fashionable and evolved into airships and dirigibles since man believed that only lighter than air machines could fly.

Today, hot air balloons are used mainly for sports and for aerial sightseeing such as the balloons you can ride to get a fantastic view of the Cappadocia landscape of central Anatolia in Turkey. Voted as one of the top 5 balloon experiences in the world, the flight is indeed a bucket list item.

The first hot air balloon flown in France in 1783 was simply a silk envelope lined inside with paper. An oil burner heated the air inside and provided the lift up but no control was possible. The balloon flew some 9 kilometers over Paris for 25 minutes driven by the wind and came down when the fire burned itself out. There followed an exciting period for balloon aviation when airships and dirigibles ruled the skies, even crossing the Atlantic with passengers. However fatal accidents like the burning of the American R 101 and the German Hindenburg finally ended the era of lighter than air machines.

Today, hot air balloons are made from highly specialized airtight and flame retarding polymers. As many as four different materials are used in different parts of the envelope. The balloon has a wicker basket suspended underneath to carry passengers. The pilot, often called the captain, controls the rise and fall of the balloon with special swiveling propane burners. By swiveling the flame inside the envelope, the pilot can also provide some directional control as well although, the balloon mainly follows the prevailing wind. 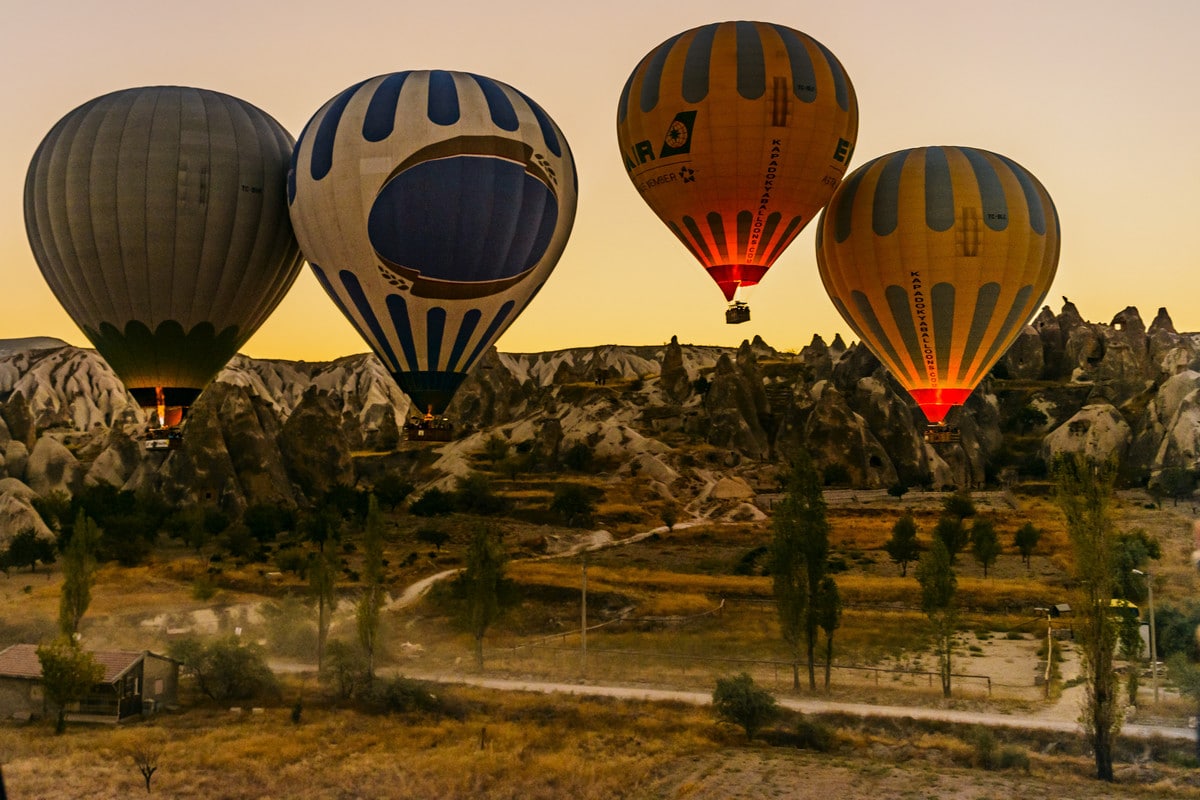 An Experience of a Lifetime

The trip to Cappadocia begins not so pleasantly. You have to wake up at an unearthly hour, bundle yourself in warm clothing as the open basket you will travel in, exposes you to cold air streams at higher altitudes. The passengers are picked up from different hotels and taken to a waiting point where a very frugal breakfast of beverage and pastry awaits you. You have to wait for the time slot allotted to your balloon and the right weather conditions.

Eventually, your turn comes, and you are taken to an open field still indistinct in the darkness where you see large dark shapes on the ground like elephants sleeping on their sides. An occasional burst of flame like mini-volcanoes goes off with a loud whoosh! The propane burners are filling up the balloons, and your adventure is about to begin!

Now declared a world heritage site, Cappadocia is in the central part of Anatolia. The landscape, with its valleys, canyons and very striking rock formations are the result of thousands of years of erosion by wind and rain on the lava-covered plain between three volcanoes Erciyes, Melendiz and Hasan that were active till about two million years ago. The eruptions caused lava to flow into the valleys, and the layers of ash got compressed to create a soft layer called tuff almost 150meters thick. Also, the eruptions threw out chunks of basalt rocks, much harder than the surrounding tuff.

Due to slow erosion of the tuff layers the valley floor sank gradually except where a capstone of basalt protected the tuff directly underneath. The result was narrow columns that looked like tall spires. Because of varying hardness of the layers of tuff, many other fantastic shapes were also formed such as conical mounds called “Hoodoos.” Early settlers burrowed into to some of the hoodoos to live inside.

In other cases, only tall slender spires remained standing protected at the top by a chunk of hard basalt rock. The French called these pillars “Fairy Chimneys”. There is a belief that at night, as the winds blow past, one can hear fairies singing! Eventually, the erosion of the pillars is so great that the slender necks can no longer support the weight of the capping rock which tumbles down. Without the cap, over a long period of time, the entire pillar erodes away and the chimney dies.

In some of the canyons, you can see several compressed layers of tuff with different compositions that show up as spectacular bands of different colors.

Lift Off into the Sunrise

Once the balloon is filled with hot air, it is time to climb into the basket. After a somewhat awkward scramble to get into the basket with rather high sides, the balloon takes off. A hush falls on the chattering passengers as the rising sun paints the horizon with light and colors and begins to reveal a landscape that appears to be straight out of an alien movie or sets for the Star Wars!

The movement up is gradual, and the balloon drifts along the wind currents as light as a feather. The fantasy landscape holds us spell-bound, and in about 60 minute’s time, the landing area comes into sight where a flat-bed recovery truck with a crew awaits on the ground.

The balloon descends slowly, controlled by well-timed bursts from the propane burners until the trailing ropes are within reach of the ground handlers. It is then skillfully maneuvered to land on the truck and secured. The burners are shut off, and the memorable trip is over.

The captain offers the passengers a taste of champagne to celebrate a successful flight and certificates are handed out to the passengers to keep as souvenirs.

By Jayant Neogy – I am a student of travel photography, still searching for the perfect shot of the perfect scene!. Soldiering on with my trusty D800

The Kingdom that Vanished By Jayant Neogy

A Fairyland for Hobbits and Trolls