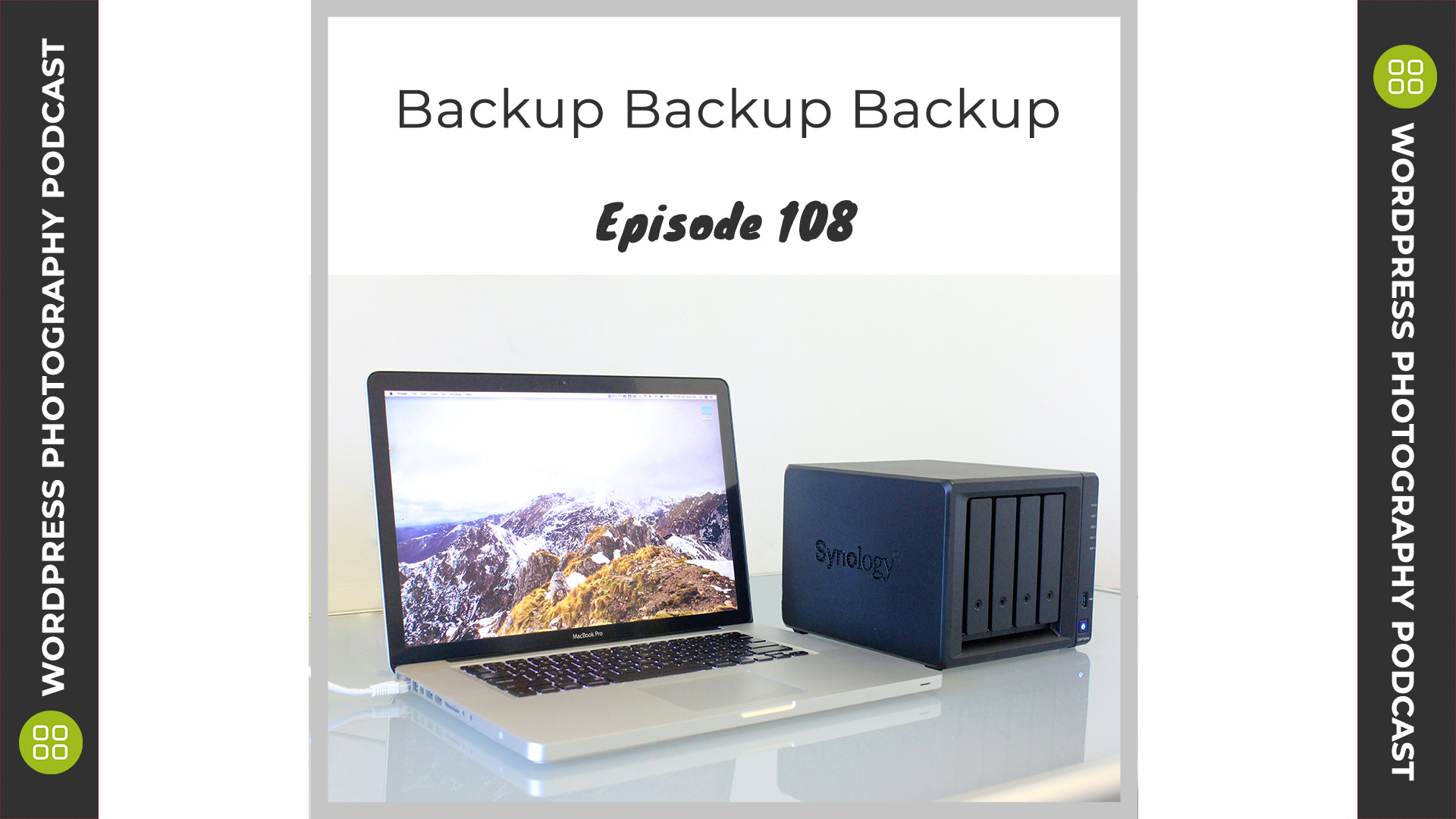 Backups are an essential part of a photographers workflow. But it can be automated at times. Backups go beyond just ensuring photographs are redundant and safe. It also means your website and its data is redundant and safe. You also need to make sure any backup can be easily restored and recovered in a crisis. In this episode, Scott answers a question from the Imagely community and dives deep into his own photography and website backup workflows.

Is the free photo storage feature on Amazon prime a good backup/storage option for photographers who have several terabytes of RAW and large TIF files?

Joke of the day:

What do you call someone hanging on a wall?

What do you call someone hanging on a wall? Art? Hey, this is Scott Wyden. Kivowitz and welcome to episode one Oh eight of the WordPress photography podcast. Today, I am answering a question and giving a little bit of insight into my own answer of this question about a well, it's a question from a listener. Of course, the listener is Sam. I apologize if I butcher your last name, DOH brow or the brow. I'm not exactly sure, but Sam asked a question and to really good question is the free photo storage feature on Amazon prime, a good backup storage option for photographers who have several terabytes of raw and large TIF files. Well, here's my answer to that, Tim. I would not rely on Amazon photos as your sole backup. In fact, I would never rely on cloud backup as your sole backup with that said Amazon Prime's photo storage feature is definitely a good supplement, an add on to your backup workflow.

So with this all said, I'm going to give you an overview of my own personal workflow as of June, 2020, when I'm recording this first everything's in a Lightroom catalog and the catalog file is sitting on my main internal drive, but the files themselves, all the raw files are sitting on an external raid. My drives are actually from GE technology. You could be using something else. Eventually I plan on having a a, a Thunderbolt three or USB C a raid system that has a lot of drives instead of just the, the two or three that my raids have right now. But with that said, I have three of these drives that are absolutely identical to which are in my house. One of which is not at my house. So here's how it goes. I have one labeled photographs, one, one labeled photographs, two and one labeled photographs, three photographs.

One is what light room is talking to on a daily basis. That is what is going in and out whenever I delete gets deleted from there. And so on any metadata changes gets done there. And so on photographs too, which is again, a clone of that. I use carbon copy cloner on a Mac. I'm sure there are windows alternatives to that. And that will literally every two days with carbon copy, cloner will say, okay, turn on photographs too. Right? And I'm going to clone it. So for photographs too, which is still in my house is literally cloned. Whatever files are added or removed from photographs of one is cloned two photographs too. And then once a month, it's time to update photographs three. This is my off site. Physical hard drive. Technically it's hard drives because it is a rate it's multiple drives now is actually at my inlaws house, which is around the block.

So it's not far away. I can get to it easy. I can literally walk with it. I even have it in G technology box, which has a handle. So I can literally carry it home if I needed to and I can plug it in. And then in a couple of minutes, because it's Thunderbolt Thunderbolt two, technically, Mmm. It will clone from carbon copy cloner, just to be update, updated to what photographs one and two are. All three will match. Now that's the physical part of this. Now I do have virtual backups. I use a combination of three things for cloud virtual backups. The first is Backblaze dark plays is extremely affordable. Not only will it back up your computer, but it can back up whatever external drives that you want. Now you pay per computer. So if you have a second computer, that's an extra seat.

You have to pay for an additional license, but Backblaze runs all the time. It's not heavy on bandwidth. It only is in the beginning, but then once everything is backed up, originally it's back. You basically never notice it. And if you're ever doing something like having a zoom call, a Google meet or something like that, and you can always pause the backup. That's the main one. And the advantage of Backblaze is that I can literally, if in a worst case scenario, contact back place and say, I need my files. These are raw files. These are video files. These are everything I need them all sent to me in a hard drive. And basically they'll send you some sort of multiple hard drives of all your files. They won't just send you one because likely most likely you have more than what can fit on one hard drive.

They'll send you all that data physically, if you need to, and then you, you, you restore it to your machines and then you send back the drive that they sent you. Now, that is the main one I use for a true good redundant cloud backup. The next thing I do is Google photos. Again, this is free with a Google account, and here's the thing, though. It will convert everything to a JPEG and it's free. If you set it to compress to a good level. Now their compression is supposed to be good for even printing. I am using it, not only for sharing photos with family and stuff, but I am mainly using it as a, another as another backup point. But again, a backup for JPEGs, not a backup for raw files, like a physical hard drive would be, or, or or what Backblaze would be.

Now. I do have Google photos, but then I also use Amazon photos, which is included in Amazon prime. Now here's the trick with Amazon prime photos, just sort of like, there's a trick with Google photos. We have to convert it to the free unlimited storage is that with Amazon prime, you have to turn off videos. Cause otherwise they force you to pay. It's not unlimited storage. If you have video backup on, but the Amazon prime app on your phone and the Amazon prime photo app for your computer can sync a, an external drive, kind of like Backblaze. So every time we turn it on and you have that Amazon photos app open on your computer, it'll start backing up those photos that are new. It won't make duplicate. So again, this is going to convert it to a compressed JPEG file. These are not raw backups, unless you pay for Amazon prime photos, like their, their actual paid version.

You're only backing up a compressed JPEG version. So if you do a recovery, it's only compressed JPEGs. And this brings me to another point with Google photos and Amazon photos is that if you need to recover, it's not a simple process. You are literally downloading all the images one by one or in batches. If you have them really organized, sure you can download albums or something like that. If you have them organized into albums, but if you do not, it is going to be really annoying to recover, but that's why they're not your main point of backup. They're just sort of a free redundant cloud option you have. So I hope that answers your question, Sam, and to anyone else who was curious about backing up your photos. Now, I also want to share a little bit about backing up websites because this is the WordPress photography podcast.

So here's my thoughts on backing up your website. Hopefully the host that you're paying for, for your WordPress website has backups built in, but if it does not, then what I recommend is to get a tool like WP time capsule, where well actually back up again, the first time will be a large backup. It'll take a while, but thereafter it's piece by piece, if there's a new photo uploaded, it'll only backup that new photo. If something is deleted, it'll delete that photo from me backup. And the beautiful thing is you can pay for WP time capsule once in their, with their lifetime plan. You connect your Google drive or your Dropbox or your Amazon S three account. It'll use that to actually store it. WP time capsule just does the data transfer and management and the recovery process if needed of your website. So if your host does not offer backups, my recommendation is WP time capsule because it's lightweight after the initial backup, the initial backup takes a while, which I would run in the middle of the night so that your site isn't getting loaded, overloaded with traffic.

And then on top of that, trying to back up entire site. So that is what I recommend for both your photographs and your photography website. So again, thank you Sam, for asking that question for sort of spearheading this episode. This was episode one Oh eight, and this is the last episode for the season. This unformal season we have every August, we take a break from the podcast, come back in September and we start new with more, more episodes. So until then, thank you for listening. If you're watching this episode, thank you for watching and we will see you in episode one Oh nine. Come September. If you have a question for the podcast, if you have a request for a topic, if you have a request for a guest, please go to imagely.com/podcast/q. And of course, if you would like to see links to the backup tools and sites that I mentioned in this episode, go to imagely.com/podcast/108. Thank you for listening again, and we'll see you in the next episode. 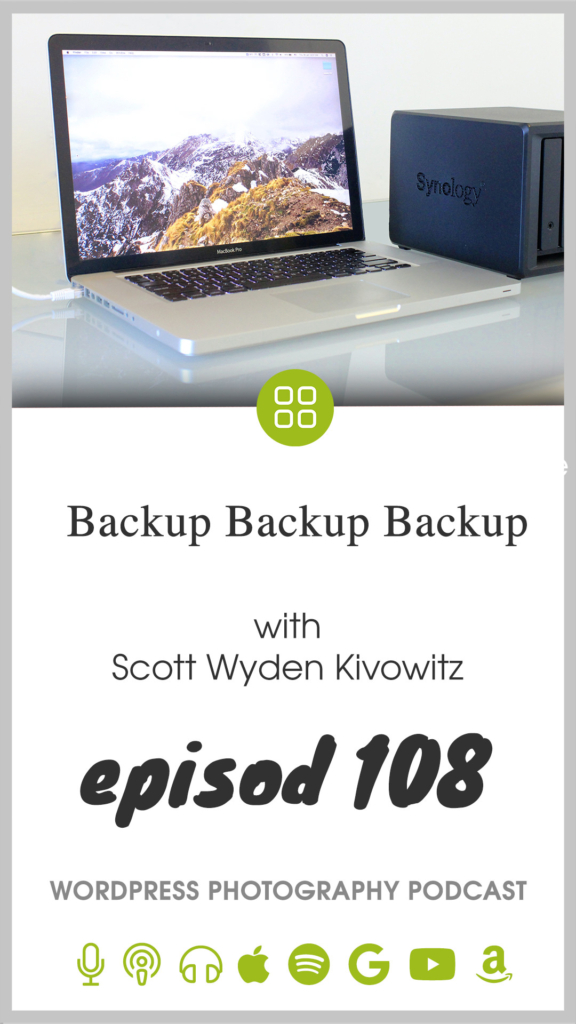