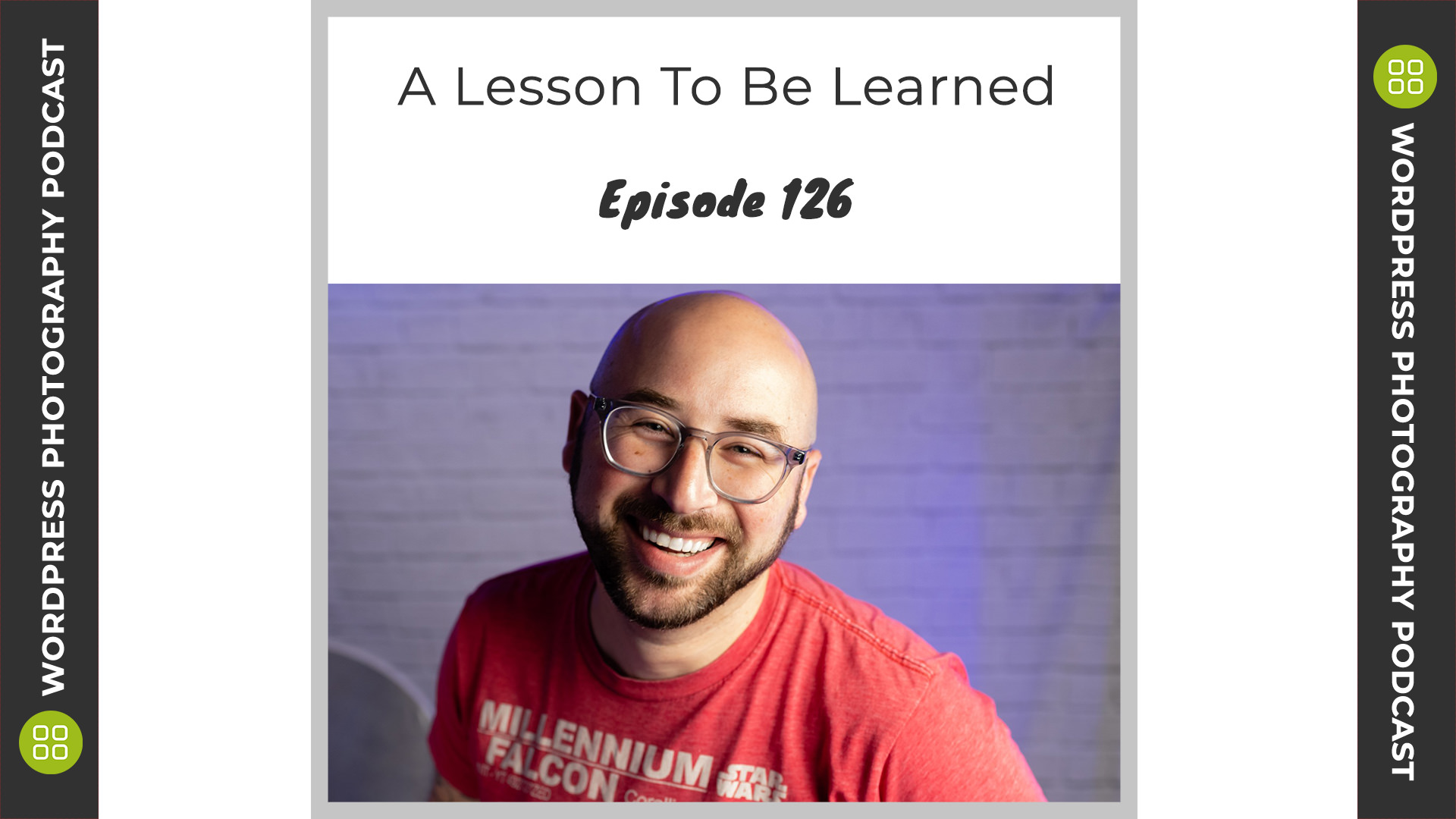 The WordPress Photography Podcast
Episode 126 - A Lesson To Be Learned

In this episode, we share a story from an international franchise that had some hiccups during a major charity-raising campaign.

Errors and mistakes made during the campaign prevented thousands of potential donations due to marketing, technology, logistics, and operational failures.

Hear the story, and think about how this could impact your photography business.

What would you do differently if you were running a large campaign for your business?

Welcome to episode 126. My name is Scott Wyden Kivowitz. And today I want to share a story with you. And it's one that I hope that everybody learns a lesson from now. This lesson goes beyond marketing. It is marketing. It is customer service. It is logistics. It is operations. Yeah, there's a variety. It is technology. We as photographers, we may not have all of the things in place of what you'll hear in the story. We may not need everything like what this company had to do in this story, but still there's a lesson to be learned here in a variety of ways. So here's the story. My family, we have never ordered from Jersey Mike's subs, even though we live in New Jersey and Jersey. Mike subs originated in New Jersey. We have never ordered from Jersey Mike subs because we like to support local businesses before we go to a chain.

And now Jersey Mike subs is an international chain. So we seriously never ordered from there before, which I think is a little, little silly, but, you know it just is what it is. So I am recording this on April 1st, but yesterday, which was March 31st, 2021, they were doing Jersey. Mike subs was doing a massive campaign all across the United States where they were donating 100% of their proceeds to charities like the Make-A-Wish foundation. And of course we felt like, like Mo many people did, you know, now's a good time to order from Jersey Mike subs. Let's let's place an order. Let's pick it up and let's have a, you know, a decent meal for dinner. And at the same time, we're donating $40 or so to to, to charity to a really good charity. Now that's not a lot of money, of course, but when you combine thousands and thousands of other families across the country doing the same thing as us, that's a lot of money donated to a really good charity.

So we figured that we would order from there, their campaign, the press release for this, the announcements for this, that it was two years in the making. I've shared this story with others. And there's been people who have come back and said that two years in the making was one year because of COVID that they did not have this event the previous year. So it was two years in the making, but even, so that means two years to perfect two really hone in on every fine detail needed for this campaign to be successful. And unfortunately, as you'll hear in the story it was not, I mean, it's successful, I'm sure, but it was not as successful as it could have been. I don't know the numbers of how much they wound up donating because I think they're still probably calculating it. But I gathered orders from my family from my in-laws, from my, from my father and mother-in-law from my brother-in-law and we we've we've we gathered orders, planning to pick up food for everybody and then and then deliver it to everybody so they can have a good meal.

Right. And I tried to place the order on the Jersey Mike's website, but it failed. I tried to download the app and tried to order through the app and it failed. I called by the way, I tried this at the closest store to us, which was not accepting online orders at the moment. And then I tried the second closest store to us and they too were not accepting online orders at the moment because the technology was, so I called the closest story phone was actually disconnected with a standard Verizon, this number is not in service message. So I couldn't, he even placed an order from the store that's closest to us. So I called a second store and they said that their online system was down. There's been problems with it all day. Again, you're talking, you know, potentially millions of people around the entire country trying to place orders and they didn't have the proper technology in place to handle all of that.

So I asked, you know, I, I wanted to place the order and they said, the wait time is 45 minutes to one hour. Keep in mind, this is cold subs. These are sandwiches of deli meat, right? These are cold subs that everything's already prepared. All I had to do was put it together and, you know, whatnot. So that also means that logistically they didn't have the manpower, the a, or the person power to make the sandwiches at a decent time and, you know, have it ready for somebody in 20 minutes. So I looked on the Jersey Mike's Facebook page, and it turns out that others were experiencing this problem. And after frustration decided to just not order, they didn't, they didn't want to, you know, have to wait as well. The, the hour, wait, time to pick up something that really could be done.

You know, if you make, if you make a submarine, a sub sandwich yourself at home, it's done in two minutes. Right. but if you go to a restaurant, sometimes it's five minutes. Sometimes it's 10 minutes still one hour right now, if this were my campaign, I would have prepared the technology and made it all orders go through the website or app, no phone calls that would reduce the overhead, right. That would reduce somebody, having to man the phone and take orders manually. When you could just have the technology, do it for you. I would have staffed up every store. I would have been all hands on deck for the entire day mandatory with overtime pay, you know, you're ready, you know, giving out all of your profit, all your proceeds to charity, you might as well pay your people with money then you're off.

So confirm away. Right? So in my opinion, there is no excuse to spend two years preparing for what could have been an enormous and historic charity raising day, two years, more so than there should have been a backup plan in place for a scenario where the technology fails. So failure on this day, on a day like this, it shows that the company did not truly prepare as it could have, which says a lot, but it also is a learning experience for our, all the onlookers. So for example, well, we have a photography website. If we are doing a big mini session, right? We are doing a big day where it's mini sessions and it's a charity raising event. Let's say which I have personally done. I've personally done a charity raising mini session. You need to prepare your website. You need to look at your historic bandwidth from your server to see how much traffic do I get.

Normally, what if I tenfold that, you know, can my server here handle it? If you're on a shared host, probably can't handle it. If you're on the cloud host or VPs, you're probably okay. But there are some hosts like nexus, which is a liquid way company who have auto-scaling, which actually means that as the resource versus the, the Ram the company, the server is a computer. So the Ram the hard drive space, the amount of bandwidth, internet bandwidth, it can do the memory that it has, like, you know, your computer has, has has memory. All of these things are automatically increased as needed on the fly by this auto scaling feature. So bring this back Jersey Mike subs, and this charity campaign, they could have done the same thing. They could have implemented auto-scaling on their server, the server for their website and the server for their app, which could even be the same server or redundant servers, which by the way, hopefully they have redundant servers, but that would have solved that problem.

And then what about the, the problem in the stores themselves? Well, what if it's internet issues with their internal network or, or wifi or whatever it is? Well, that's where, you know, 5g hotspots or whatever, come in, come in handy, you know, making it so that there's redundancy going on. And then of course, there's also the manpower. When I did my child raising mini session event for my photography, I had three additional photographers. It wasn't just, I also had volunteers come help for the more logistical parts of, you know, signing people in and keeping track of which session was who and all that stuff. So it was all mapped out with redundancy. So there was always someone to do a job, no matter what, there was always a technology in place to handle everything. So this is not, you know, looking down and saying anything bad about Jersey Mike's.

This is just a learning experience for us as outsiders to what happened to them. This is something that we should all learn from so that if we do anything where we expect higher volume than we normally do have a contingency plan, prepare for it, and then have a contingency plan just in case something goes wrong. Right? So with that I have to give big kudos to Jersey Mike subs. Even though I didn't have a chance to support this big charity raising event I still have to give them kudos for spending an entire day of giving all of their proceeds 100% of their proceeds to worthwhile charities like the Make-A-Wish foundation. I just wish I could have been a part of that, but it is what it is. So hopefully this story has some of the advice that I have given is a good learning lesson for all of us photographers around the world to walk away from.

And maybe you learned something else that I didn't mention as well. Maybe you have your own takeaways. And if you do comment down, you know, comment on the show notes at imagely.com/podcast/one, two six comment and share your takeaway from this. And if you disagree with me, that's perfectly fine. This is all my opinion, of course. And again, I'm not looking down on Jersey, Mike subs, I'm not talking smack about them. I'm just sharing my experience and some takeaways from this, what I've learned from this. So again, imagely.com/podcast/ 126. Please comment with your takeaways. If you agree, if you disagree and all that stuff, thank you for listening. And we'll see you in the next episode. 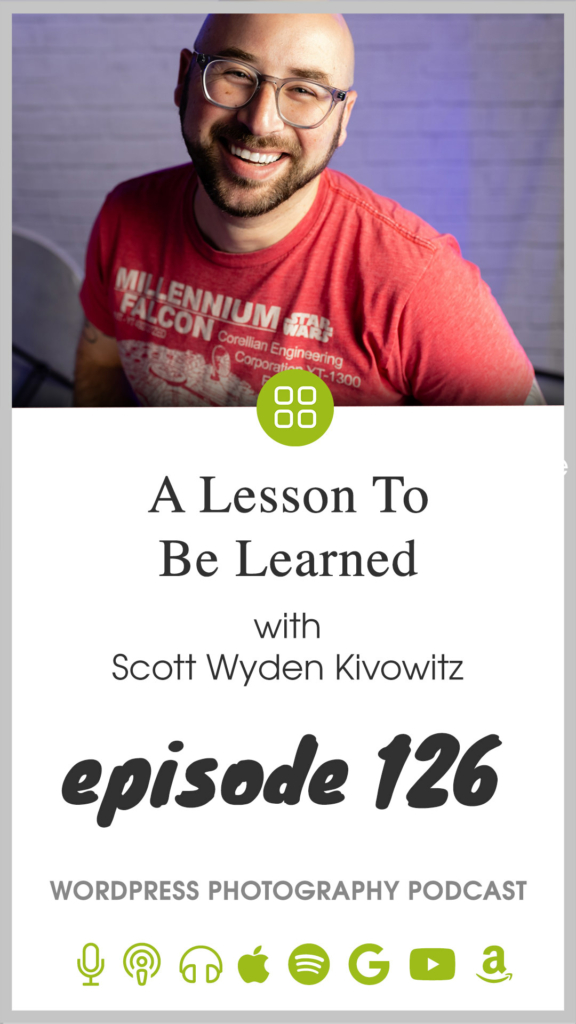