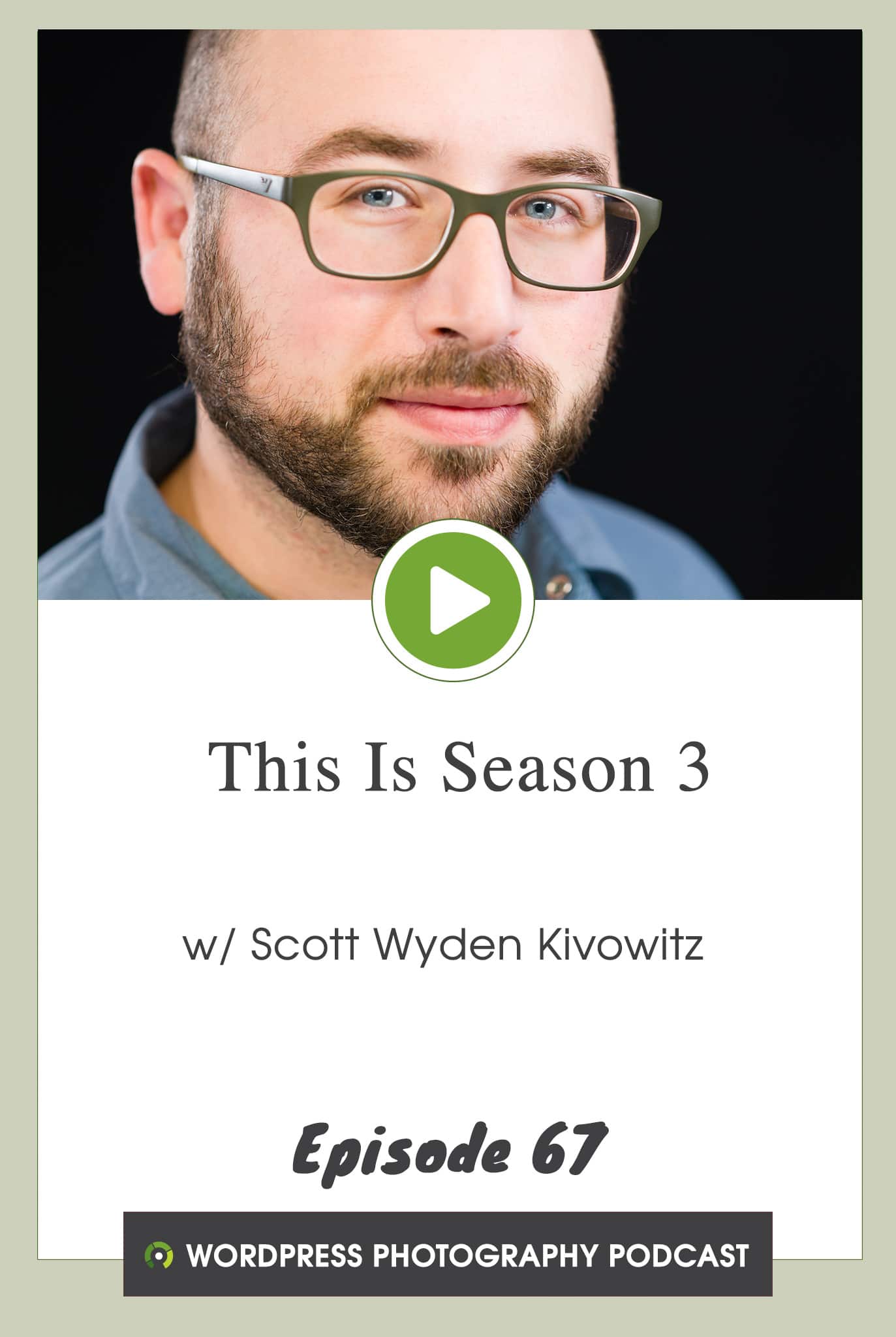 The WordPress Photography Podcast
Episode 67 - This Is Season 3

Welcome to the third season of The WordPress Photography Podcast! This is a quick recap of what's going on, and a call for your questions, and requests.

To ask a question for a later episode, or to request a topic or guest, go to imagely.com/podcast/q/.

Don't forget to join the WordPress for Photographers group on Facebook.

Transcription was done by Temi.com which means it's an AI generated transcript. The transcript may contain spelling, grammer and other errors, and is not a substitute for watching the video.

Welcome to episode 67. My name is Scott Wyden Kivowitz and today I just want to give you an update on the podcast and just WordPress in general. Now it's been, I guess over a month to month. Maybe we took some time off after episode 66 to just recharge and think about what else we want to share with you and you know, we're definitely not done with this podcast. There's so much that we could share. So many people we can have come on and so on. So I'm happy to be back. This episode is only being recorded in audio. Uh, I'm experimenting with the idea of doing some episodes audio only when, when let's say I only have something small to share about WordPress or websites in general and, or, or let's say we have a guest who doesn't want to do video for an episode, so we'll just do audio at that point.

Now I was just at wordcamp New York City and that was a great event. I actually spoke about podcasting, so that was really neat. And once the recording from wordcamp New York City is online, that will probably turn my session into an episode because I can basically, it's not something that every photographer will, will love to listen to, but I figure, you know, I might as well get it out there because it's all about podcasting. If any photographers or thinking about podcasting, you know, it, it's, uh, something that might be useful. And in fact, in a related note, I am personally starting a personal brand photography, genre of my photography business. And I actually started a local podcast related to personal brand photography. So there's a good reason why photographers might want to create a podcast is if your audience listens to podcasts and you can create something that will catch their attention and make it and be engaging with them and, and, and whatnot.

Then maybe that's what to do. Now. WordPress is still not at five point. Oh, yet it's still in the four point nine range and a Gutenberg is coming along though Gutenberg is maturing with every update does now, I think it's like half a million people are now using it because the WordPress.com has added it to every single site that they host, so it's now being tested wider, much wider than than it ever was in the past. So Gutenberg is coming along is doing really well. I'm liking it. How it's maturing. You can now drag and drop and and things like that. So it's coming along nice and I'm excited for it. If you haven't tried Gutenberg yet, just Google WordPress, Gutenberg and you can try that anytime. The WordPress for photographers, facebook group is growing. I think we're just about at 2000 members and I'd love to see you there.

Just go to facebook and search the WordPress for photographers and to group and you'll see it's one that I maintain a and it is a. it's the larger of the one of the ones that have that will show up for WordPress for photographers. Now I have a list of guests that I'm planning on inviting to become guests on the show I should say, and I'm working on that right now and uh, so by the time that this episode is live, we should see, you know, uh, in the queue at least I should see a bunch of new episodes queued up for recording and scheduled and whatnot with some guests that you've heard from before and some new guests that you've never heard from before. Last but not least, I want to start at the start this out. This might be the informal season three of the, of the podcast.

I don't, we don't really do seasons, but for the sake of just, you know, structure, I'm going to say that it is. This is season three. So for season three, I'm going to start out with asking you what you want to hear, who you want to hear from end. To do that, just go to imagely.com/podcast/q. You can ask a question not for, for the show. I can make an episode answering your question or you can request a guest or a topic you want to hear about things like that. Imagely.com/podcast/q. You are part of the show. You might be a listener or a subscriber. You might download episodes, whatever it is, you might watch it on Youtube, whatever it is you were the show. You are the one who or ones that that that come up with. The topics that you want to hear about. You are the ones that that, that drive the direction that we go with the show, so that's it. Just comment. Let us know. Imagely.com/podcast/q or you can comment on this episode at the show notes, imagely.com/podcast/67. Thanks for listening and we'll see you in the next episode.